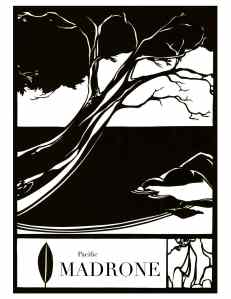 Ive been working on an artful identification guide to 6 Northwest trees. They are some of our most common and types that all of us trailrunners, dogwalkers, and urban wanderers should know.

I was inspired by my own lack of knowledge, one of those “think you know but really dont” times. When my 5 year old can rattle off the tree species in Discovery Park faster than I can (thanks to the awesome Nature Kids Preschool there) then it gives me pause.

I received a grant from local King County arts funder 4Culture to make this set of images. They have been reproduced as a cardstock take-a-way, and piles of them will be available free for passerby at parks and outdoor recreation spots around King County in November.  Sites include; Discovery Park Environmental Learning Center, Camp Long Visitor Center, Seward Park Aububon Center, Lewis Creek Park Visitor Center and the Ballard Branch of Seattle Public library.

If you are interested in seeing the set of papercut images full size and all together, and presented in a cool printed metal format….. they will be on display at Venue in Ballard through November, if not longer. 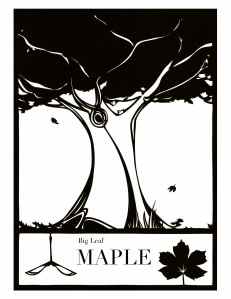 For a great book that is a beautiful and broad reference for us treehuggers, check out “Northwest Trees” by Arno and Hammerly. It has excellent pen and ink illustrations and sets each species in its place in the larger picture of our forests and history. 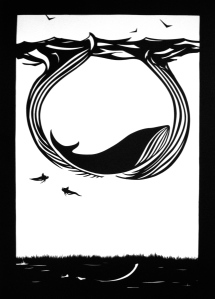 Setting up to brainstorm for the Whalefall exhibit… sand + water + fish + ocean environment + waves, surface + all the feeders +  depth  +  tiny shrunken cups from the deep  ocean  +  waves  + currents  + barnacles + whaleships  +  research boats  +  bahamian banks babies +  sounds +  other whales +  beach belly rubs  +  alaska spy hops  + in the distance far offshore  +  blow  +  orcas from jakes boat + finbacks in the wake coming home on Halcyon +  up through the Westwards steel hull,  then in the water as we swam +     and then the thought  of oceans depth and falling……. to the sea floor,  and a soul that fell and we tried to raise it, but never really did ,  stayed there in that deep blue sea. Probably sheparded off by whalesong  to a different strange place  that I dont know how to tell my son about.  The thought that maybe this is part of my connection to the idea of a whalefall, this story in my heart— it sat so heavy on my chest that a giant sigh came out and the tears ran and throat choked up in a way that doesnt happen when i just tell the story. We are looking so hard for connections these days, social network, webs and share buttons, and they are in everything we do and say and feel.   Already our own web of history and sights and sounds.  Im thankful to be in a life where i get to play these thoughts out to new realizations, to take a simple word and work with what it does to me and make it tell my story for me.  Let that story and its pictures out. More sighs are here, Ely is waiting for stories to be read. All this in an empty shop window. Wow.”

So one night I was sitting in the mountain cabin  ( this is not the sad story)  and listening to  a podcast from Radiolab about loops and one segment, one word really, caught my attention. Whalefall- when a whale dies in the water and falls to the sea-floor, (along the way providing food and nutrients for a whole world of creatures for a very long time after its death).  I had never heard this or even thought about the possibility and was drawn like a moth to the ipod and listened to the segment with notebook in hand oddly captured by it. Months go by and I keep thinking about it and why it struck me so. Then an opportunity for an art installation in an empty storefront comes up and I decide i will try and work with this idea somehow. From there it becomes a rather Butoh-esque thing as product is set a side and making art for process sake takes over. The notebook entry quoted above comes in here.  Now a year later the installation is up  at One Main Street in downtown Auburn, and it is a pile of ideas and things and images that have come along and connected the dots from here to there, most will walk by and say “huh”.  One group of boys said “is that supposed to be art”  to themselves outside as i was finishing up the install.  Its not really pretty, has its moments, but it is the traces of me figuring out how a piece of my mind works and  seeing the ripples of one day    15 years ago in so many things that i am doing now.  I should say thanks to the Auburn Empty Storefronts people for giving me space and resources to do this thing.  It does remind me a lot of my work as a Butoh dancer,  pretty naked and pretty out there, mind wide and running, with  an audience who are wondering what it is they are supposed to be seeing.  I guess thats the real question, what will all thats come befor help them to see?

The exhibit will be up in downtown Auburn till Christmas, and if anyone knows a sciencey, or whaley, or conservationy, or marine biologisty friend who might want to use the “whalefall” image at the top of the post, let me know. I would love it to live on.

When I think of home it is still a saltwater farm, and a blonde man, and a swirl of swallows so busy, so certain of purpose as they build.

This month we will present Straight Back Home to You  as a multimedia installation in Gage Academy of Arts’  Steele Gallery. It is an idea that was blown in on the wind and kept me up all that night. I am lucky to know the lovely new curator at Gage, Shelly Leavens, and even luckier to have been given an opportunity to make an idea into an exhibit.

I drew a napkin sketch with an improbable nest at the center, so i called the remarkable sculptor Margie Mcdonald. Scampering through the picture was a woman, so I got in touch with mover and shaker Amy Ross and she assembled a team.  I imagined subtle counterpoint to McDonalds dramatic structures….and the ephemera of Sarah Jones had to be worked in. But what would be the sound?… Emily Eagle is crafting that part.  And with all of this there must be one perfect bite or smell or bit of drink…. Jess Thomson is the one for that in my life.

Now here it is, a thing forming around me, that I get to push and pull together at the end when they  have done their good work. Maybe with a thousand birds of mine,  and childs building blocks, and the artifacts that we keep through all the changes, all the moves, and  all the  paths we make from our front door.

Come be part of the fun and pies and performance during the reception on Sept. 21st. 6-8pm.